If we only knew…

Geonetric is one of the most fascinating organizations Trail Ridge has had the pleasure to spark. And I say spark, because that is all it took to light the fire under their founder and former CEO, Eric Engleman. They have been at it since 2008 and telling stories all the way through...

Pete Behrens shares this story from his early experience and ongoing relationship with the founder, Eric Englemann.

Work Life at Geonetric in 2008

While Geonetric was a small niche firm helping hospitals build and manage their websites, they had grown to the point where their ad-hoc copy/paste architecture approach was straining every aspect of their business. In fact, for two years they had tried (and failed) multiple times to build a new architecture platform to enable code/module sharing across clients. However, each time they tried to dedicate time and people to the effort, the current development work would make the their goal a moving target, moving away from them faster than their new architecture path. Their current client success was hurting their investment toward the future – a common challenge for early stage and growing organizations. Leadership was frustrated by the lack of development progress. Was it a technical problem? A people problem? An investment problem? Accusing fingers were pointing in multiple directions.

I was fortunate to happen into this Cedar Rapids, IA based organization based on a referral from Kenny Rubin. Little did I know where the trail would lead for this organization or its leader, Eric Englemann. People often assume, mistakenly I believe, that Agile or Scrum is the catalyst for change and improvement. Based on my experience across dozens of organizations, I disagree. In Geonetric’s case, while Scrum was at the heart of our transition, it wasn’t the primary driver. Rather, it was the visibility of the work, the focus and intensity we created on the transition, and through this, the strong leadership to say “no” in order to enable the new platform to emerge. 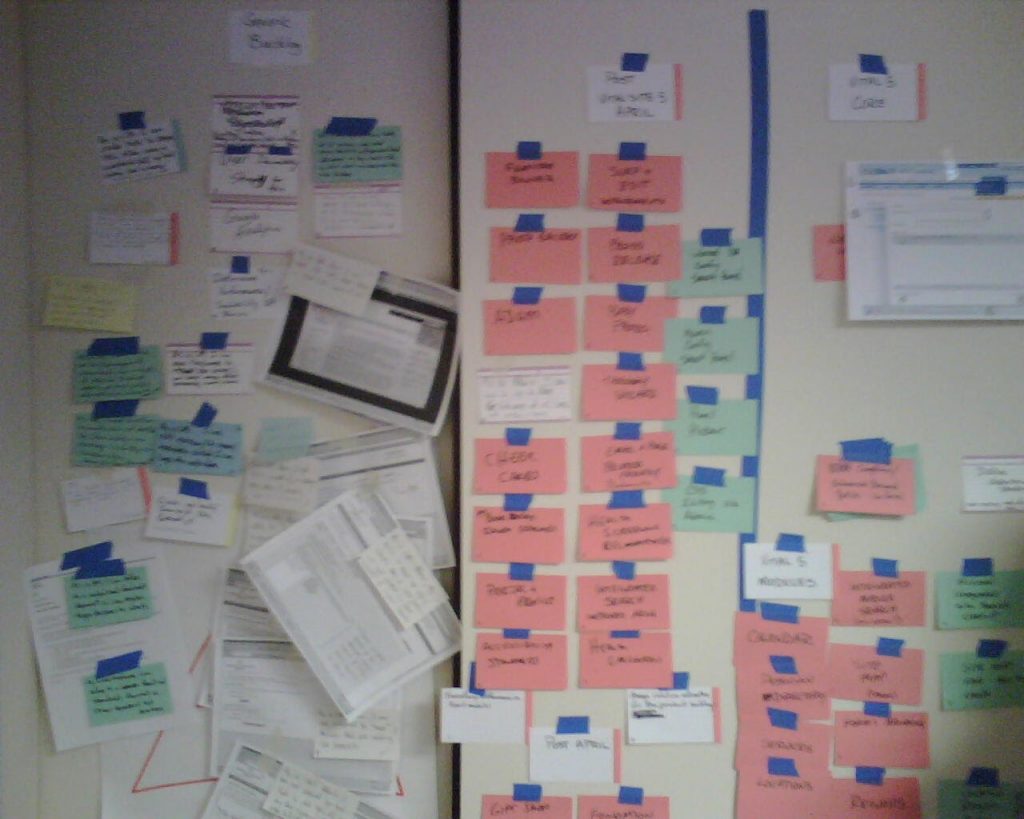 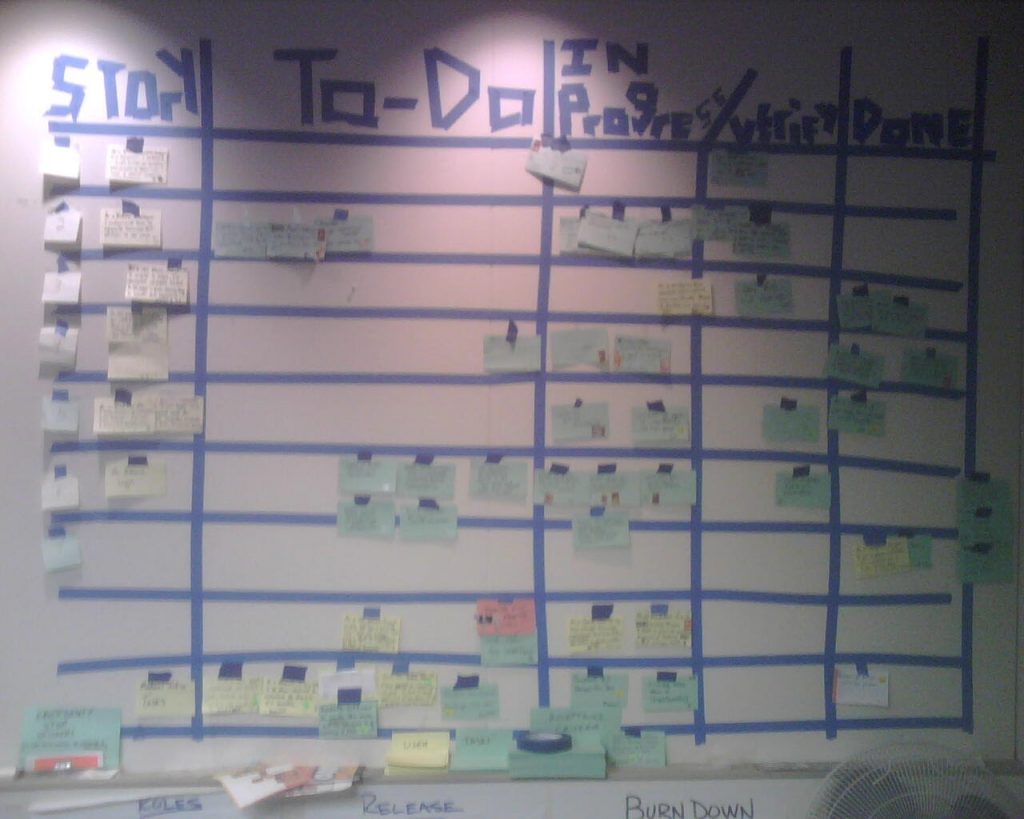 I have included a couple of pictures back from 2008 of our visibility boards (sorry for the poor quality, my cell phone camera and photographic skills back then were not up to par).

I wish, however, I had captured a picture of Eric sitting in the room in the middle of their workspace where we had all of the boards – release and sprint boards created by the teams. I recall watching Eric process all of this new information with both a smile of new power and a scared “oh, shit” look with all that was up there. All of a sudden, the choices and consequences of those choices had become visible. The need for focus, the impact of current customer distractions, and the requirement to say “no” to some customers in order to prepare them to move to the new platform. It was like opening the door to a whole new world! And Eric bursted through!

Many people I respect say it is better to follow a leader than a company. A great leader will foster an awesome culture, spark creativity, engage and empower employees, and build value for customers, regardless of what they are focused on. Eric Englemann is one of these leaders and I would follow Eric anywhere. Not only did Eric develop an amazingly productive, healthy and sustainable culture at Geonetric, he developed the leaders, and shared leadership, to allow this culture to continue to learn and grow upon his departure. Allowing him to explore other ventures such as the Iowa Startup Accellerator Fund and the New Bohemian Innovative Collaborative which are themselves creating many new ways of improving the world of work. In addition, I invited Eric to join the Board of Directors at the Scrum Alliance where now he sits as its Board Chair (as of 2019).

What I love most about educating and coaching leaders is the exponential multiplying power of the spark. So while the initial spark was barely visible in igniting a small customized hospital website company, the fire that was lit has continued to burn into a raging fire throughout Iowa, and now the globe! Great work Eric!

I was not around for most of the agile journey that Geonetric undertook since those early days. And that is the point. I don’t have to be, or want to be. Our goal at Trail Ridge is to spark the insight and kickoff the journey. It is up to the organization themself to take the journey. What I loved about their organization was the spirit in which they took every part of agile in every part of their organization. One of my favorite pictures was a team of employees dressing up as a Human Scrum Board. 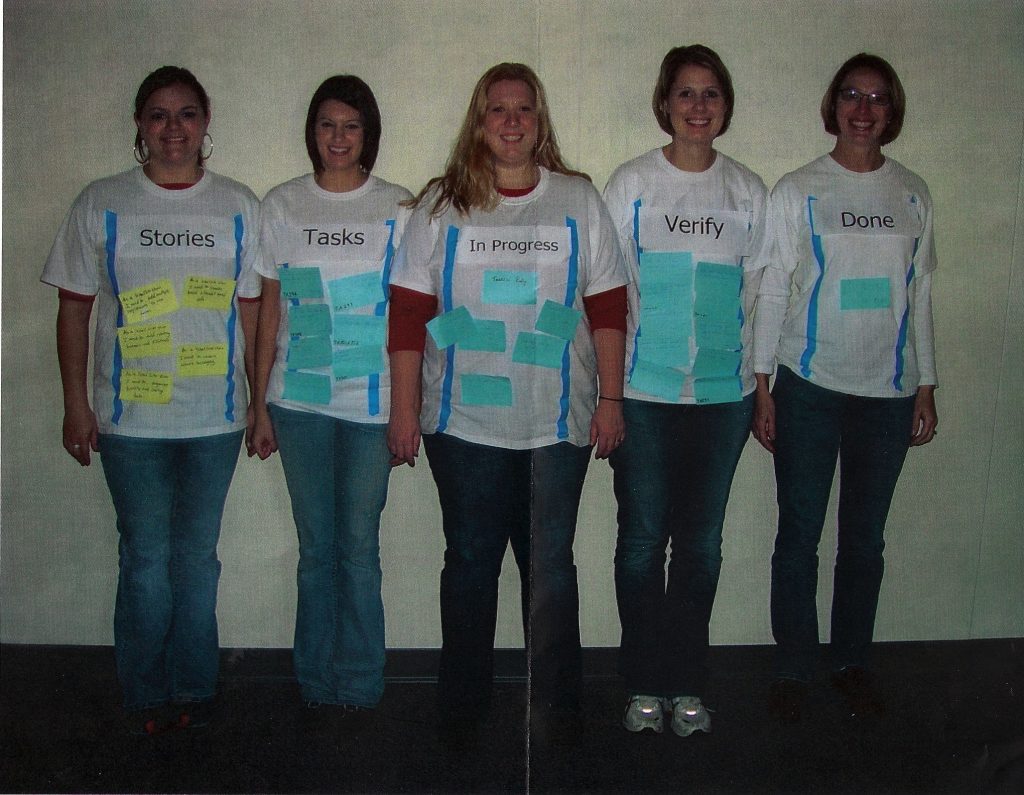 The following posts are a small sampling from Geonetric’s GeoVoices Blog. I have enjoyed following their work and learning from sharing of their work. I hope you enjoy it as well.

Adopting an Agile Process, 2008 – Eric Englemann shares some of his early thoughts during the initial transition.

Icing on the Cake, 2009 – Eric shares that they received the “IT Innovation in Health” for their new patient portal product. The one that they had been trying, and failing, multiple times before we ventured on this agile journey. Congrats!

Check the Map More Than Once a Day, 2011 – David Sturtz on speeding up feedback loops for all aspects of work at Geonetric.

Getting Rid of Performance Appraisals, 2012 – Eric sharing the experiment from a formal performance review system into a culture of feedback.

Agile Behaviors vs. Agile Culture, 2012 – Eric sharing what an agile culture looks like at Geonetric.

Wow! That Was the Most Productive Meeting I’ve Ever Seen!, 2012 – Eric reflection from an external stakeholder brought in as an observer at a team retrospective.

How Agile Marketing Challenges Traditional Campaigns, 2014 – Nicole Knoll sharing their exploration of agile ways of working in their marketing campaigns.

Sometimes it is Hard to See Change Up Close, 2014 – Eric Englemann reflects on how impressive the transformation has been in that his catalyst leadership has sparked a whole new way of working within the organization.

Back to Client Stories