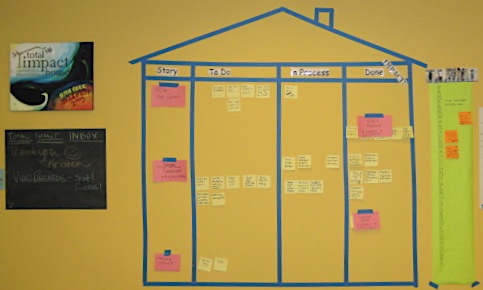 New Impact House SCRUM Board from Total Attorneys on Vimeo.

It was time for a change.

Since we started participating in the Total Impact House with Purse of Hope, we have used SCRUM to help organize our efforts. SCRUM is used in software development to break down a whole project into all of the tasks that need to be completed. Each single task is written on notes so they can be physically seen, instead of just being known in the mind of a project manager. The visibility of a SCRUM board, with columns marking whether a task needs to be started, is in progress or is finished, allows for a decentralized effort. People can pick up tasks and just do them without needing approval from some bureaucrat.

It’s a big help especially when we still need to do our jobs while working on Impact House efforts at the same time.

Our old SCRUM board needed some improvements. It wasn’t focused enough, but then again maybe we weren’t either.

As far as function, it was used a lot. But looking carefully on the old board’s left side, where projects are listed, there were simply too many efforts going at the same time. In one spot, it appears a project was turned into two sub-projects. That’s not as efficient as this process should be.

It was time for an overhaul.

Aside from streamlining a new board to focus more tightly on a few projects at one time, we wanted the board to be expressive. We added a roof to the board, hung the painting made for the Hyde Park Jazz Festival, put up a chalkboard next to the SCRUM area for notes and hung a suggestions envelope.

We also made room for a photo area with small pictures of the women living at the Impact House and added a time line marking our efforts month by month.

The best part of this new approach is that so far it’s working. Within a month, we completed two of the original four projects put up. We made video postcards, with Total Attorneys staff simply describing themselves on camera and also asking questions of everyone in Uganda. While we are still working on fund raising, we also want to communicate with the growing number of women and supporters in Uganda who are now a part of this. We also just held a computer drive to sell old computers, with proceeds going to the house.

The video postcards have been put online for folks at the Impact House to see, and the computer drive is underway. People have purchased 14 computers so far, and we are expecting to sell 20 total.

But the biggest news is a date and location has been set for our first fundraiser event that will be run entirely by our Chicago-area volunteers.

Think of this as an early invitation to join us at State in Chicago, 935 W. Webster Ave., on Friday, April 9 from 6 p.m. to 9 p.m. for a happy hour. We will be holding a raffle for donated prizes and possibly a silent auction.

We are looking for raffle prizes, so if you know of anyone with goods to donate – electronics, gift cards, artwork, comic relief, anything – contact Kelly Muir, one of our tireless organizers, at kmuir (at) totalattorneys.com.

The event is a slightly scaled back effort from a poker tournament we had originally talked about, but we decided to take the cannonball off the side of the pool before going for the double back flip off the high dive.

Besides, change is good.